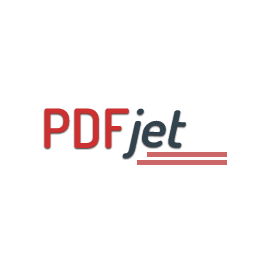 PDFjet for .NET is an open source .NET library that allows software developers to generate universal PDF reports inside their web or desktop application without installing any external special software. PDFjet programming library is simple to use than several other available libraries. The great thing is that the source code is well documented, simple, clean, logical, and easy to understand.

An overview of PDFjet for .NET features.

API mainly supports PDF format but can export PDF documents to a number of other formats.

PDFjet for .NET can work with any .NET based programming language.

Getting Started with PDFjet for .NET

PDFjet for .NET provides software developers the capability to generate PDF reports inside your own applications. You can create Multi-page reports with just a few lines of code using the"Table" class. Once the document is created, you can easily insert new pages as well as add graphics or text elements into the existing PDF. You can also modify the existence of PDF files according to your desires and save it to an external disk.

Sometimes an organization requires to combine several PDF documents to one big document. PDFjet library provides developers the functionality for combining multiple PDF files into a single one with just a few lines of code. It also facilitates users to generate a new PDF document from the existing one. Give users the power to create reports of their choice with ease.

PDFjet for Java simplifies the addition of a list to PDF documents inside their own application. To show a list of items in a PDF document, first, you need to create a list and then add list-items to it. It also provides support to pass a symbol (Unicode character) for marking the list-items. Numbered or lettered lists are supported. There are also specialized classes for Roman letters and Greek letters.